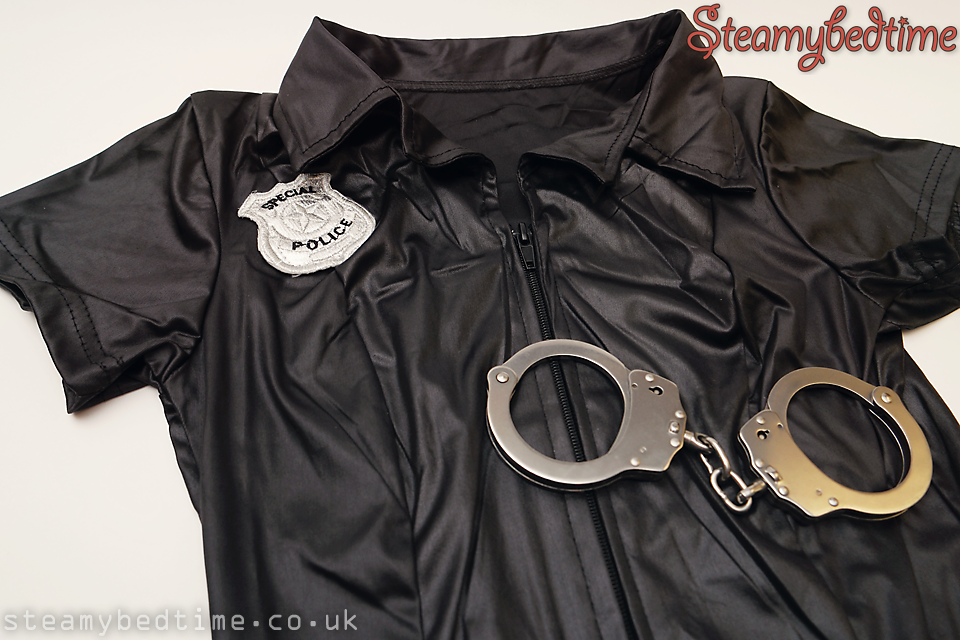 This is a review of the Lovehoney Fever Sexy Cop Dress in a fantasy story format, where Special Officer Judy gets more than she bargained for during a routine investigation into an anti-social neighbour's excessively noisy lovemaking. Also, if you like the look of the handcuffs in the photo above (they're really good!) we discuss them in this earlier article: Real Handcuffs vs Furry Handcuffs.

"That's quite alright Mrs Logan. We'll look into it as soon as possible. And thank you for your call."

The operator glanced towards her supervisor as soon as she heard the terminating click of the phone call on her headset earpiece. "It's Mrs Logan again," she explained with a slight sigh. "Usual noises from the Station Road flats. A complaint about her neighbours, Mr and Mrs Simpson. Again!"

Sergeant Watkins rolled his eyes. This was becoming a regular occurrence on the weekend late shift. "I guess we'd better have a word with them. It's not like we've got anything more important to be doing." His reply was loaded with a weary sarcasm. "We'll send over Officer Judy. At least it should be an eye opening experience for the new girl."

When she arrived, Judy took the stairs to the second floor and had no difficulty finding flat 202. It was at the far end of the corridor and appeared to be the only flat with light streaming through its partially glazed door. After a sharp knock on the glass, the door was answered by a couple, looking somewhat sheepish to see a police officer at their door. Judy quickly confirmed they were indeed the Mr and Mrs Simpson from the incident report.

"What seems to be the problem, officer?" they asked, glancing out of the flat to see if something was underway outside.

Judy cleared her throat and glanced at a small black notebook. "We've had a report of... shall we say, inappropriate noises, coming from your flat. I've been asked to investigate and make out a report. I gather it's not the first occasion where there has been a complaint, so I trust I can rely on your cooperation?" The couple glanced at each other nervously, the young lady blushing slightly. Their hesitation spoke volumes to the trained eye of Officer Judy.

"I guess you'd better come in. I'm sure we can explain everything." This time it was the male occupant who spoke, seemingly less embarrassed than his wife, although there was just a trace of a nervous stammer in his voice. He stepped aside and opened the door wider by way of invitation. 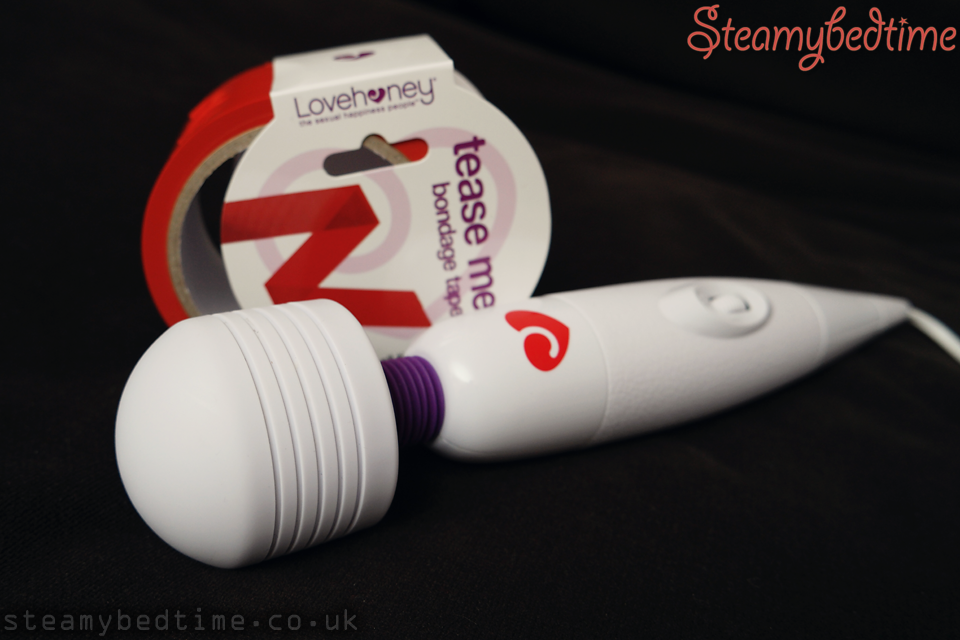 Officer Judy quizzed them in depth and noted their explanations, which on several occasions caused her to raise her eyebrows. She had always considered herself rather broad minded, but the account of the incident involving bondage, vibrators and merciless teasing, left her feeling very hot under the collar. She decided to delve a little further into the exploits of this young couple, who were quickly beginning to intrigue her.

"I think I have a pretty clear picture of what happened, and I thank you for your candour." Judy closed up her notebook and sat back in her chair. "On this occasion you can consider this a final warning and I'm simply going to request that you show a little more consideration to your neighbours and keep the noise down in future. But, a final question for the purposes of my report, I understand the implement you describe as a magic wand, but I'm a bit less clear on this so called - bondage tape. Perhaps you can explain that to me again?"

The item in question, a broad roll of shiny plastic tape still lay on the coffee table. Judy picked it up and examined it, turning it in her hand. It looked about two inches wide, rather like a roll of parcel tape. "Perhaps you would like a simple demonstration?" Mr Simpson enquired.

Judy's heart seemed to skip a beat. Against her better professional judgement she stood and handed him the roll of tape. "Well of course it's obviously not our usual procedure. But, perhaps in the purest interests of research, it might be useful."

"For the purposes of your report?" Mrs Simpson prompted helpfully. "We'd like you to feel that you've had our fullest cooperation." There was a sensual glint in her crystal blue eyes and a naughty grin upon her wide lips. "If I could just look after your handcuffs for a few moments, to help you feel more... comfortable."

Well aware that she was breaking every rule in the book, Judy cooperated, watching in delighted anticipation as she watched Mr Simpson attach the magic wand to her upper thigh. She did not resist even as Mrs Simpson secured her wrists behind her back using her own pair of handcuffs.

"I don't know about you, but having your hands tied, being helpless to resist the onslaught of pure pleasure - that's what really drives me so very crazy," Mrs Simpson explained. "I do apologise about the earlier noise, of course, but I think you'll soon appreciate the nature of my predicament!"

Tease bondage tape feels like a cross between parcel tape and cling film. Advertised as sticking only to itself, it's probably worth noting that while not sticky per se, it does feel quite grippy against other smooth plastic items; such as the handle of a magic wand.

Judy felt the head of the head of the magic wand pressed hard against her panties while the tape wraps were initially applied. The contact relaxed to a gentle pressure once Mr Simpson released his hands, and gravity eased the wand down slightly.

"Ready?" Mrs Simpson asked with a mischievous smile. Judy nodded silently, then gasped, taking a sharp intake of breath as the control wheel clicked into its lowest setting. The unique rumbling vibration from the magic wand slowly, relentlessly, filled her body with tingles of pleasure. What began as gentle teasing quickly began to overwhelm her, and she was grateful to feel the arms of Mr Simpson wrap around her from behind, gently embracing her and helping her remain balanced.

For her part, Mrs Simpson remained seated on the floor, never directly touching Judy's body, but watching the waves of pleasure across her face, knowingly making slight adjustments to the wand's intensity, easing it up and backing it off. It was as if she was a maestro, conducting orchestrated pleasure upon the instrument that was Judy's body. Teasing, denying, then teasing some more, all the time inevitably winding Judy up to a climactic crescendo. And when she came, surprising herself with an involuntary sequence of delighted squeals and moans that was almost melodic in tone and volume, she gratefully relaxed into Mr Simpson's strong arms and felt herself gently lowered to the floor.

The couple, who had been strangers barely half an hour earlier, unhurriedly released the bondage tape from her thigh and replaced the handcuffs on her belt. Relaxing into their affectionate embrace, Judy soon began to regain her composure. Still feeling a little weak at the knees and breathing heavily, she finally straightened her dress, said her goodbyes, and departed the scene. "Err, I'd like to thank you for your cooperation," she called back over her shoulder. "And don't let it happen again!" She headed back to the car and left as quickly as her rapidly faltering dignity would allow.

"Officer Judy?" Sergeant Watkins intercepted her the very moment she returned to the station. "I see you're back from your little chat with the infamous Mr and Mrs Simpson. I'm afraid there has been another complaint. Funny thing is, it's very close to the time of your visit and the neighbour who logged the complaint mentioned the squeals and gasps of pleasure she heard this time sounded like they came from a different, hitherto unknown female. I don't suppose you would know anything about that.....?"

Overall we're pleased with the Fever Sexy Cop Dress. It's not quite up to the quality of this Classified Schoolgirl Set that we reviewed recently, but it looks the part, feels great, and is very clingy. The hat is a bit flimsy, but looks OK, and has a matching "Special Officer" badge at the front. It comes with a belt, which also looks ok, but is a bit plasticky and simply fastens at the back with a square of Velcro. To be super-critical, the material doesn't feel particularly robust. It's new and we've had no problems, but looks like you might need to be careful if you're wearing any sharp jewellery, etc.

We mention a few Lovehoney products in this fantasy story scenario. Some quick and convenient links to them, and a couple of related items, are copied below:

In this article I'm taking a look at mainstream movies featuring a variety of school uniforms that you can use to inspire your own sexy schoolgirl role-play costumes....

We first reviewed this Lovehoney Deluxe French Maid Costume almost exactly one year ago and it has remained one of our favourites....

This sexy Lovehoney fantasy costume is maid for thrills and its semi-realistic styling makes it great for naughty French Maid role play....