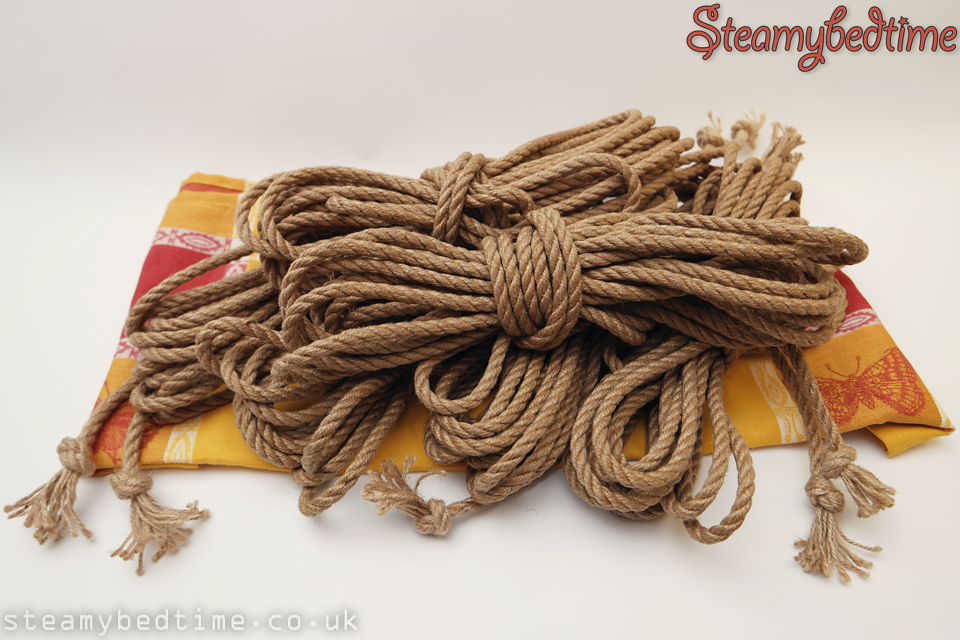 In his summing up of the rope treatment video on Shibari Classes, Esinem describes preparing your ropes as a "labour of love", and we're certainly beginning to see the wisdom of those words. The following article is an account of our first attempt at this process. It has been an ultimately successful, though not entirely smooth process.

Just before Christmas we ordered some high quality Japanese style jute ropes from Esinem-Rope and we have now had time to prepare them, based on guidance drawn from several online tutorials. The following article summarises what we tried to do, and describes a couple of slight stumbles along the way.

For our first impressions of the untreated ropes, refer to this earlier article: Esinem Okinawa Jute Rope ...and for more photos of us putting it to good use, check out: Sofa Hogtie Improvisation 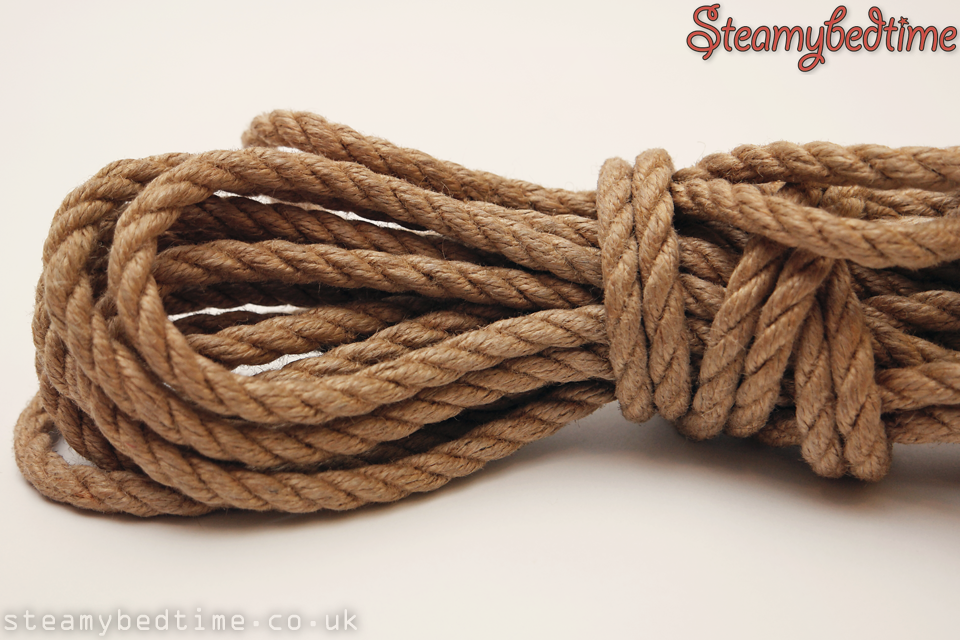 Please note that we are novices at handling rope (enthusiastic novices we'd like to think) and in fairness to ourselves the final results do appear pretty successful. If you take away nothing else from this article, our main bits of learning have been: take your time, don't become disheartened if it feels like a slow process, and remember that it will all be worth it in the end.

We've included links to some of the expert guidance that we attempted to follow - so please take any advice direct from these sources, not from us. This story is simply intended as an account of how the process went for us.

Having digested numerous tutorials and guides, we arrived at the following steps that felt very achievable for us as beginners. 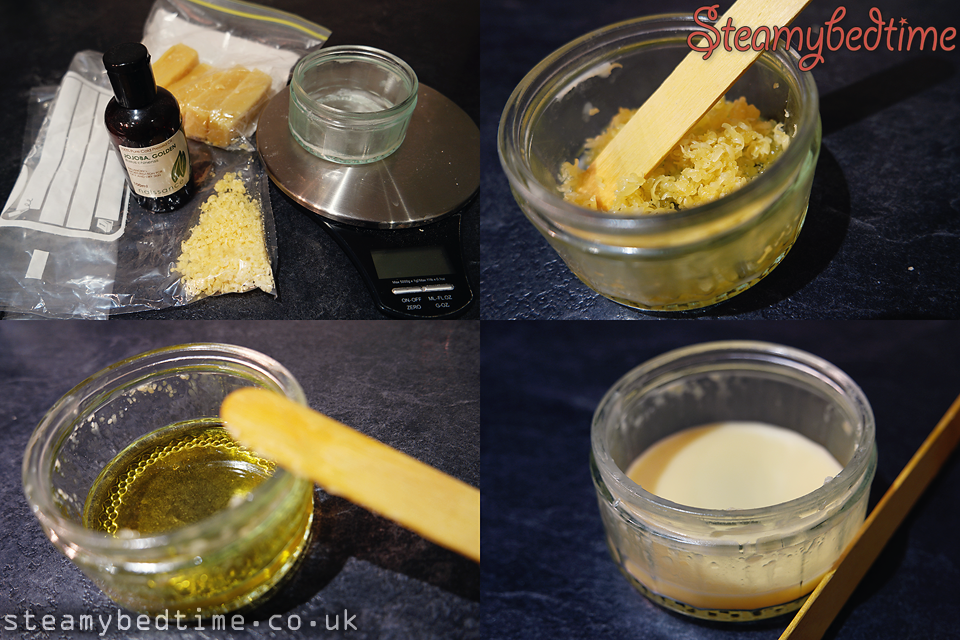 We tried a 50/50 mixture of grated beeswax and golden jojoba oil, which forms a relatively firm paste, but rapidly melts when rubbed into your hands.

We followed the first three steps of our plan and whilst the process seemed to go OK, there wasn't much change to the feel of the rope. Lots of guidance online stresses not to overdo the waxing and oiling of new ropes, but we were probably being too cautious. After steps 1-3 the rope still felt very stiff and didn't seem to be handling very well. It was becoming clear we needed a slight rethink. 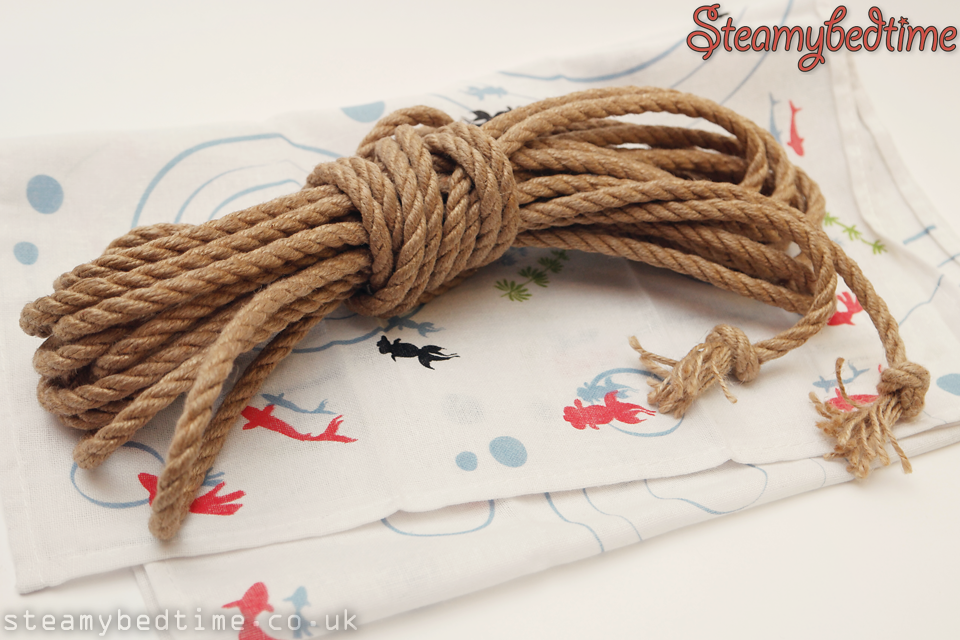 Still erring on the side of caution, and over the course of a couple of days, we repeated the light oiling of the ropes in the evening, using a cotton cloth dabbed with jojoba oil. This resulted in a bit of an improvement in the feel of the ropes, although we had been hoping for a bit more looseness and flexibility.

As beginners it felt frustrating when you're naturally keen to try stuff out. After a few days we decided to follow a piece of advice in the ShibariClasses tutorial (Akechi Nameshi recipe) and we ran the ropes through blocks of beeswax. We followed this with another burning off phase, and a final rub with jojoba oil. It's not altogether clear to us if this specific step was the key, or if our persistence had simply finally paid off, but the ropes were suddenly feeling great and will certainly only improve over the course of time, and use.

The photos we took seem to have a bit of a "wet look", but rest assured there is no oily waxiness on the surface of the ropes. It might simply be an effect of having flash guns placed very close to the rope.

Naturally we were dying to try out the newly treated ropes and a classic box tie was our first choice. 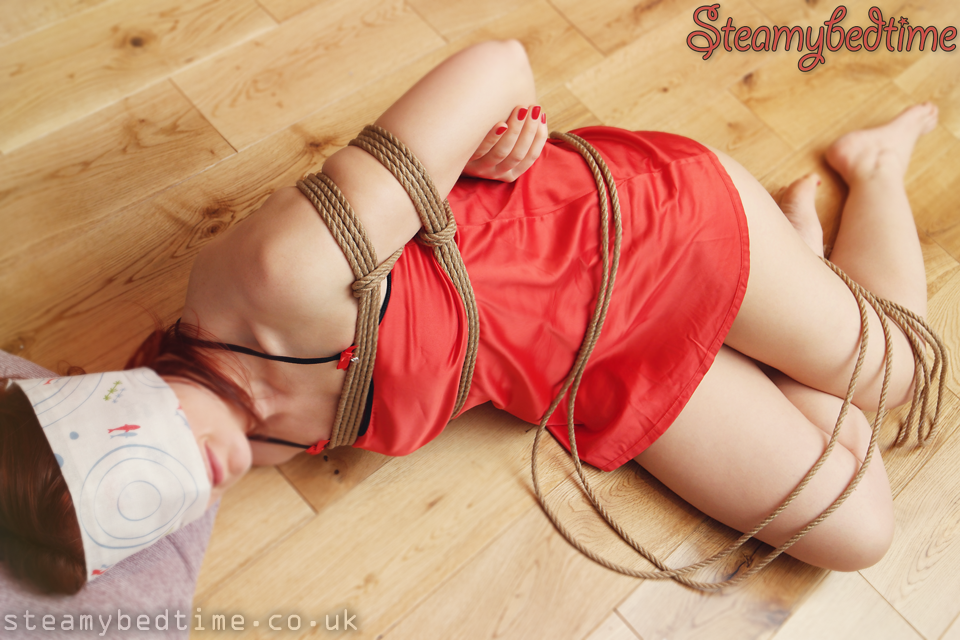 The rope seems to be handling beautifully, and whilst it has to be admitted the stem of this Takate Kote was slightly off centre and rather lacking in symmetry, it held very securely, and we were both more than satisfied with our first opportunity for some playtime with the freshly treated Okinawa jute.

Naturally everything feels very different to the soft cotton rope that we've used in the past and it will take a bit of getting used to. But for raw sexiness, the unyielding embrace of jute, the slight creak of the rope as knots become seated, the smell - an unfamiliar smokey woodiness that's hard to define - it's immediately clear this rope is in a different league to soft braided cotton.

We're looking at Bruce Esinem's Shibari Classes website, which has a wealth of information - not just for beginners like us.

In conclusion, go to the website Esinem-Rope if you'd like to try any of this for yourself. And if you've been secretly thinking that this entire treatment process sounds like a nightmare, you might like to bear in mind that pre-treated ropes are also available!

In a slight departure from our usual blog format, we're presenting this as a standalone photoset, without any particular context or back-story....

Our submission to Sinful Sunday 377 blends two images from our latest blog post into a slightly skewed and not totally centered diptych....