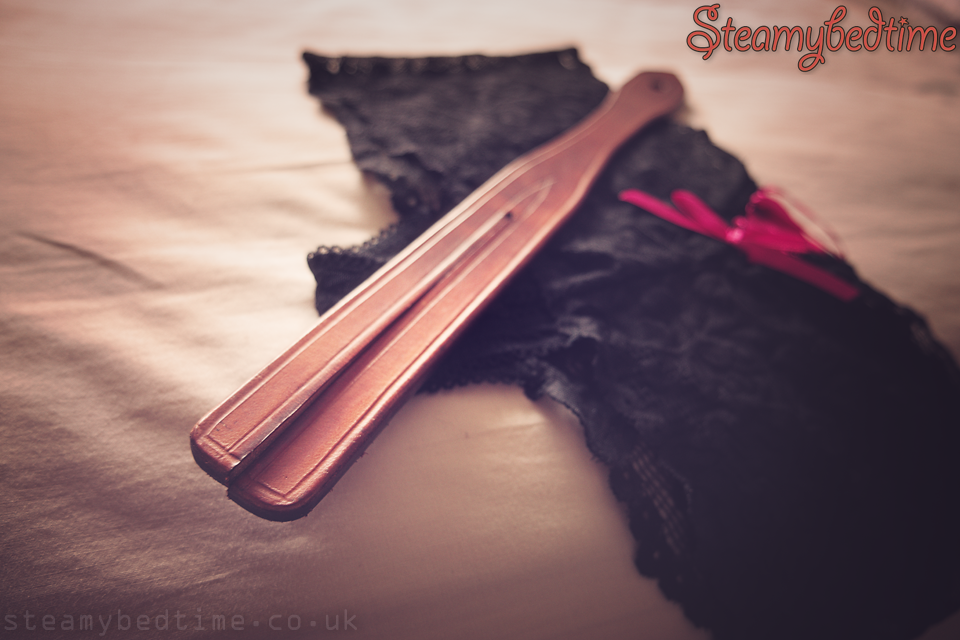 We were delighted to be sent this Mini "Stinger" Tawse (from the Ouch-UK Correction Collection) by @RTersley - it really does pack a sting that belies its diminutive size.

By way of an introduction, it might be worth clarifying the term "Tawse". Whilst it's sometimes considered synonymous with "strap", I've always thought that the way in which the dangerous end of the strap is split into thinner tails is what distinguishes an implement as a tawse. In the olden-days of school corporal punishment, the tawse would have been found mainly in Scotland, but I do know it was not uncommon on our own doorstep here in north-east England.

Meanwhile, in the Steamybedtime toy collection, we have quite a respectable range of spanking toys, but mostly they have been "sexy" spanking toys from the likes of Lovehoney, and other adult retailers. Alongside this we've collected a small selection of improvised domestic implements, such as hairbrushes and oversized wooden spoons. So you're probably wondering, what is it that distinguishes this item from the rest of our collection? 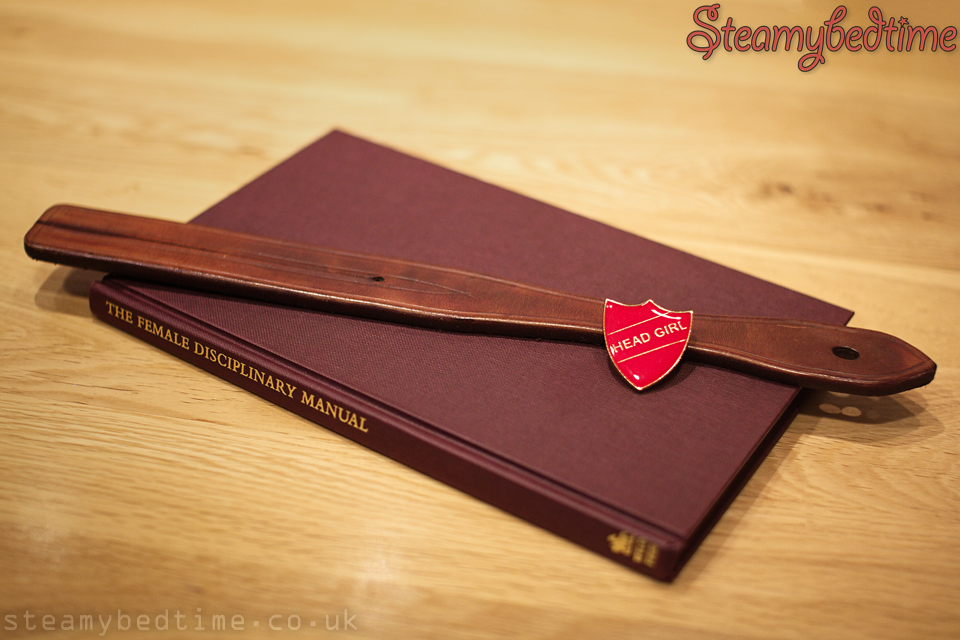 In the Correction Collection, Ouch-UK seems to be positioning themselves very much within the genre of realistic, traditional discipline. In that sense, you could perhaps say that our Mini "Stinger" Tawse is the first time we've played with a purpose made spanking implement which is not merely a toy.

It's handmade from 6mm thick, hard and dense brown leather. Initially it is feeling very stiff, but we're reassured that is perfectly normal and the leather will mature and become more flexible with use. Ouch-UK use a range of leathers and this is the "Model B" version of this tawse; it's made in heavy, oak-bark tanned leather. They describe it as "very stingy" and they are not wrong!

Having felt the impact of just a few gentle swats (self inflicted purely for test purposes!) I knew this tawse meant business. Fortunately the hubby was more than happy to oblige with a very thorough warm-up spanking before we began experimenting with a few light licks in an over-the-knee pose.

Over the next few months we'll put this pocket tawse through its paces in a variety of different play scenarios, fantasy scenes and (for reasons to be revealed later) even in some different outfits! To get a feel for the implement and to form our first impressions, we decided to try it as the grand finale to to traditional over-the-knee hand spanking. 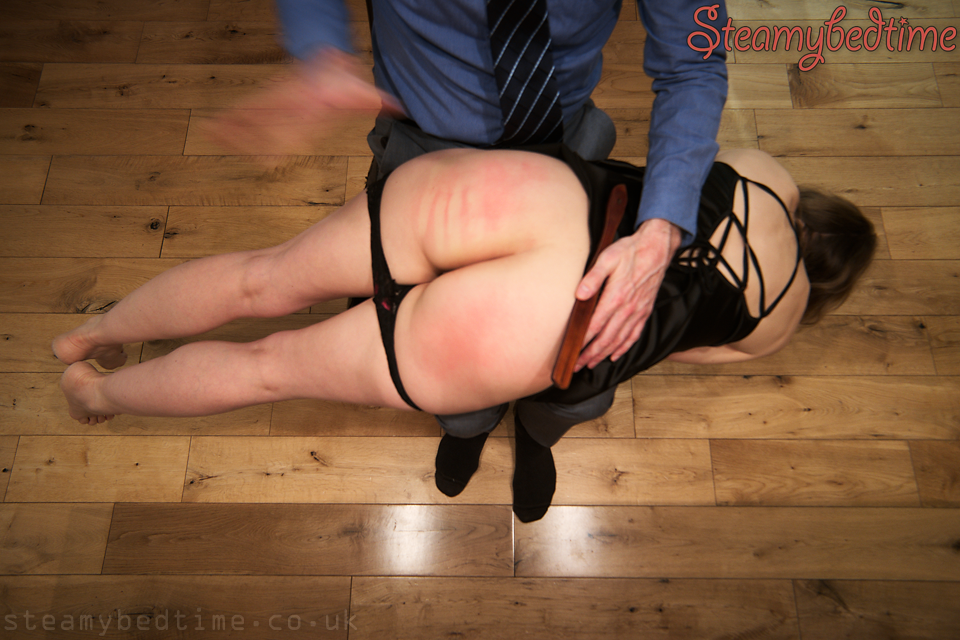 The Correction Collection Mini Tawse is a very compact tool, easy to keep on hand as a visible promise of what is soon to come. 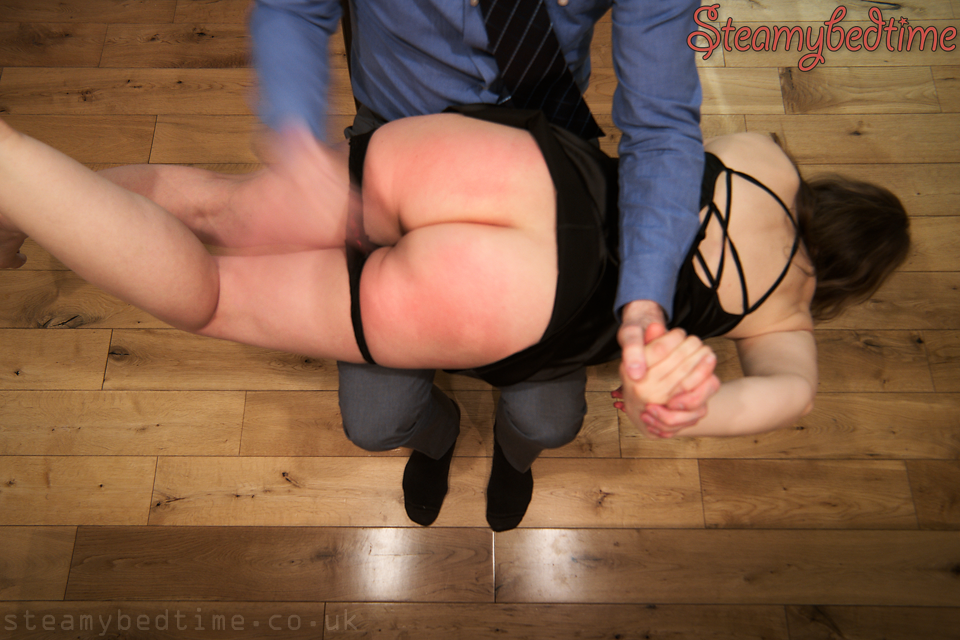 This small size means that, should Sir be required to discourage any hand-waving protestations, it's easily slipped into his pocket until it's needed. Which, if you are inclined to wriggle and struggle a bit too much, you'll probably find won't be very long in coming!

I wasn't exactly sure what to expect - I think in my mind I was expecting something akin to a whack of a wooden ruler; it's approximately the size of a typical foot-long ruler. On my already tingling bum cheeks it was a very crisp sting with a sharp note that had no difficulty biting through the warm-up spanking I'd just received. 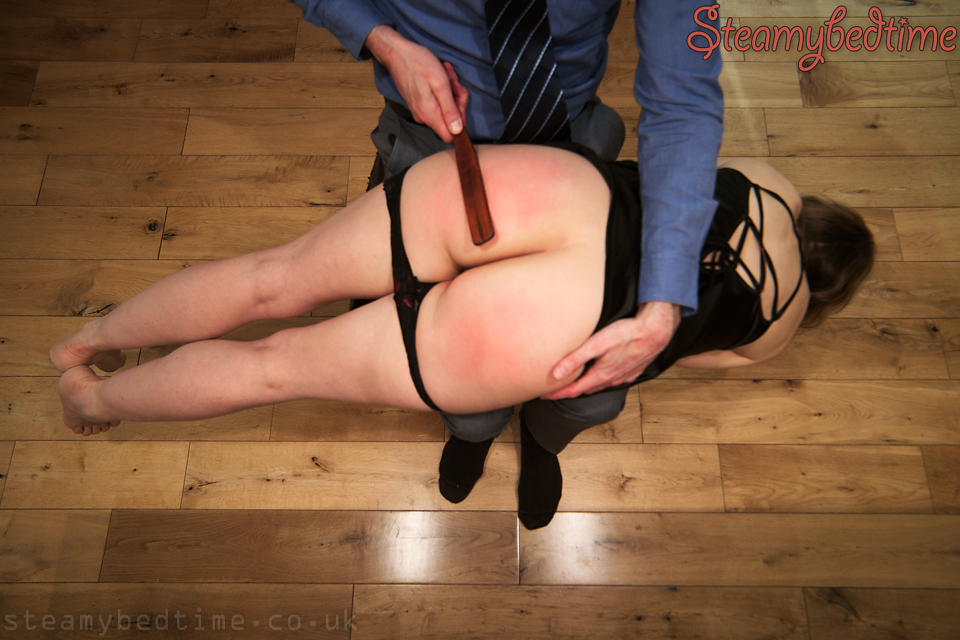 Delivered with just a flick of the hubby's wrist it was already more intense than I had expected. If noise is a factor for you, this might be a really useful point to note - it delivers a lot of sting without much racket.

It's small size is not going to envelop even the skinniest of derrieres, so your techniques will need to reflect that. Continuing with his light, flicking motion, the hubby progressively worked upwards and downwards, and from cheek to cheek. My experience was that the intensity builds rapidly into a persistent stinging and I don't mind admitting I found it difficult to hold still. It's not that it's ultra-painful or anything - just very, very stingy! 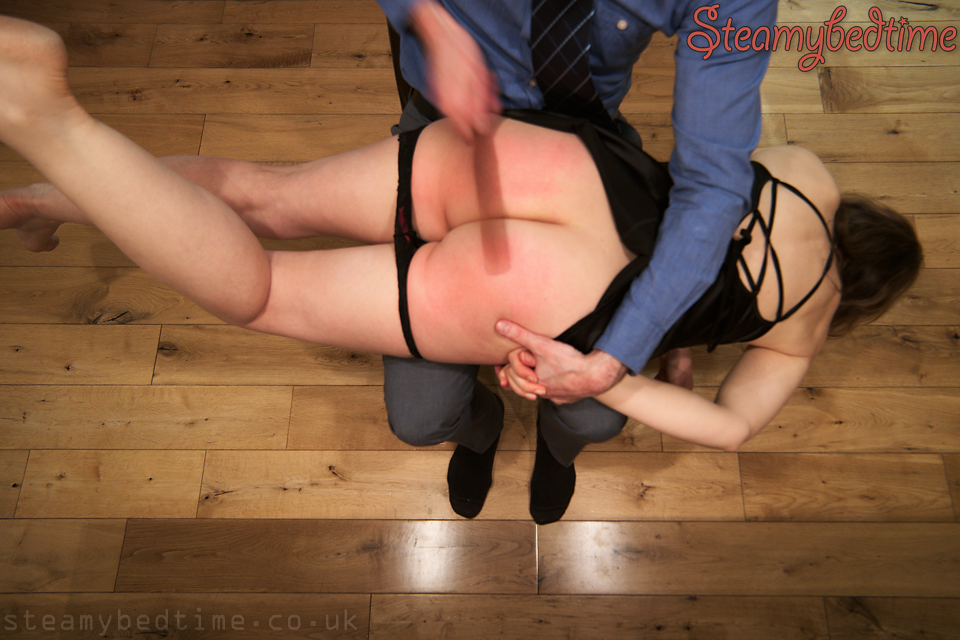 Having come this far, we obviously had to experiment with a few firm whacks to judge how the impact evolves. On this occasion we kept it very brief, but in half a dozen firm licks I learned enough enough to confirm that it becomes a far more penetrating sting with a real bite. It definitely fulfilled our "sting in the tail" fantasy scene and it brought a mid-week OTK spanking to breathless and memorable conclusion.

It has taken me a while to grow into some of our other spanking toys and get to a stage where I really feel like I have a handle on them. I suspect this will be no exception, but my first impressions are extremely positive. The feel and the smell of the leather is very impressive - quite unlike sex-shop leather toys. When you handle this Mini Tawse you immediately know you're dealing with something rather special. You can't help but notice the heft and thickness of the hard, dense leather, tanned and prepared by UK craftsmen; absolutely not off a production line.

We've been describing our first impressions of the Ouch.UK.com Mini "Stinger" Tawse. Please do keep checking back, we'll be playing with it a lot more, and follow us on Twitter, @SteamyBedtime, for more updates.

As an added bonus, take a look at this post on our Twitter feed, and you can see the first stage of my warm-up spanking in progress - in the form of an animated GIF...! ;-) x

We're examining scenes from three mainstream movies that feature Sorority Spanking and Paddling, and (with lots of photos) we'll try to learn the essential ingredients of a kinky initiation ceremony....

We are taking this Fetish Fantasy Extreme Advanced Silicone Spanking Paddle for a test-drive on my poor unsuspecting bare bottom, so read on, and find out if it lives up to its stingy reputation....

We're taking a look at a brand new spanking toy, the Plimsollator-13, recapturing the sorely missed days of strict visits to the headmaster's office....