Tied Up In Movies 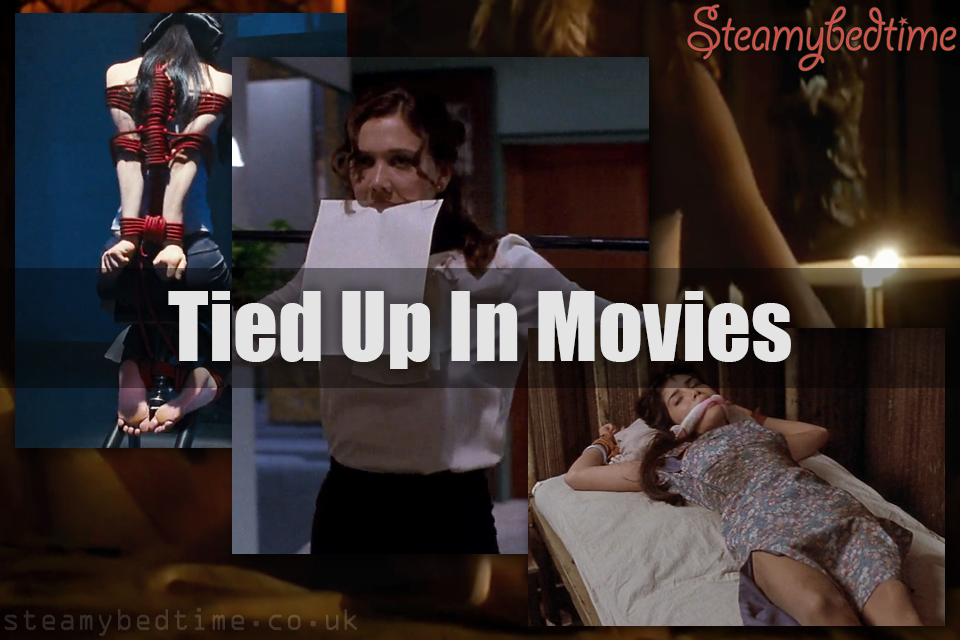 From Secretary to Big Trouble in Little China, we take a look at some favourite mainstream movie bondage scenes and suggest how they could inspire you to have some naughty fun in the bedroom.

So without further ado, here are the movies we chose:

There may be a couple of spoilers ahead, so please do take note of the list above.

We simply have to start this article with one of our all time favourites. The year was 2002, and it's Steven Shainberg's Secretary. A romantic black comedy, with Maggie Gyllenhaal looking simply perfect in the role of Lee Holloway, a fragile young woman dealing with issues of self-harm, an overprotective mother, an alcoholic father, and having recently been released from a mental hospital. She takes a job as secretary to an equally troubled and obsessively perfectionist lawyer, E. Edward Grey, and the two of them embark on a sizzling although rather turbulent love affair.

Lee is finally able to take control of her life when she discovers the joyful freedom of her submissiveness. In her own way she wields the real power, while the dominant Mr Grey is ultimately in thrall to her. It's a fabulous film - definitely essential viewing. 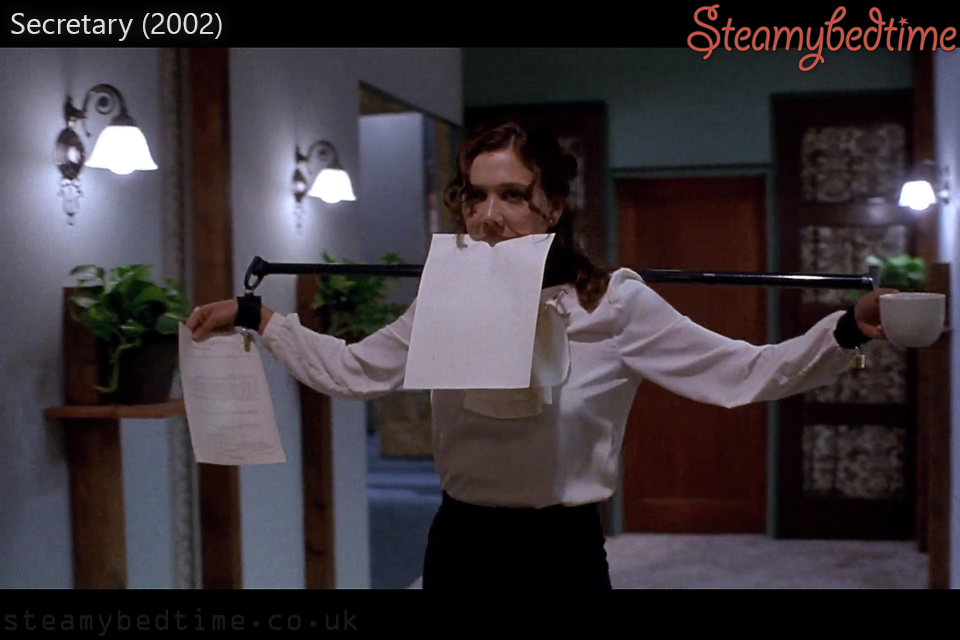 The toy you see in this opening scene is a spreader bar with locking collar and cuffs. Typically it's much easier to find leg spreader bars, but you could try this link to Lovehoney Spreader Bars.

Alternatively, we have improvised this scene before and we used a wide bamboo pole and Japanese style jute rope. If you need to brush up on your rope tying skills, take a look at the ShibariClasses website; it's really helped us improve our technique. A further alternative would be to simply attach a collar and cuffs to a solid wood pole. Drop us a line on Twitter if you give that a try, we'd love to hear how it goes! :-)

Okay, so you probably want to skip the bit with the ice-pick murderousness, but right up until she stabs him through the eyeball, the opening scene of Paul Verhoeven's Basic Instinct is literally dripping with sex appeal. Was it really Catherine Tramell? We will never know for sure!

In this moodily lit, steamy bedroom scene, Johnny Boz finds his wrists bound to the bedhead at the height of his passions. We'll skip over the ensuing bloodbath, but as we see later in the film, there's something intensely arousing about the way in which the restraints are suddenly introduced into the midst of the scene - not at the beginning, but close to the finale. 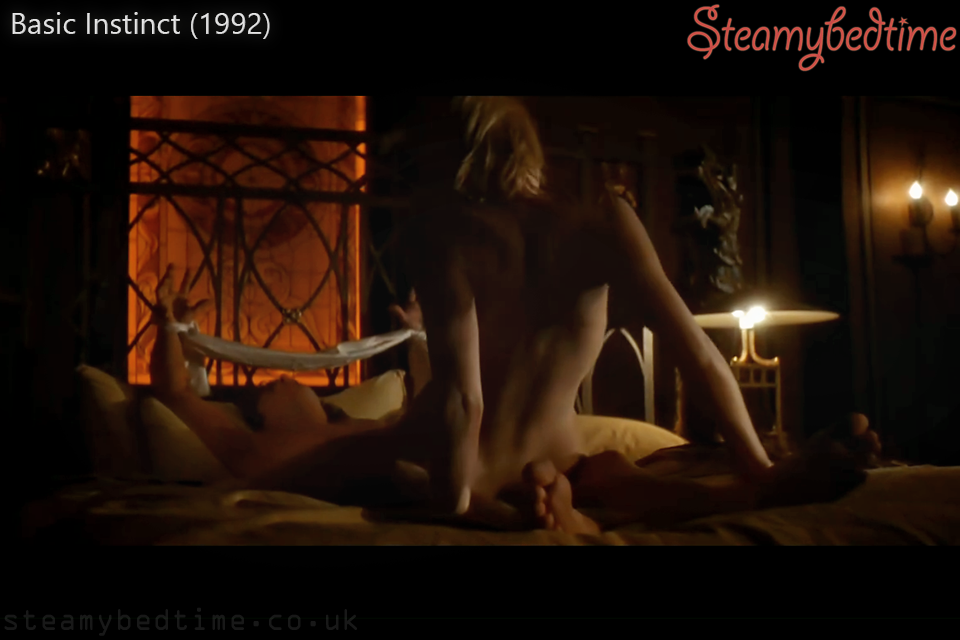 Here our heroine uses a white silk scarf to tie her lover's wrists. It looks great in the movie, but there can be problems with silk scarves either not holding a knot, or being difficult to quickly untie if you pull too hard. A couple of better silky options would be these two Lovehoney Oh Silky Restraints, or choose a set of four Tease Silky Restraints.

The mood of the scene was very much one of quick and easy restraint, so if you're not keen on silk, our recommendation would be go with a simple pair of Tease Furry Handcuffs, or some comfortable Bondage Boutique Soft Wrist Cuffs. Get them in position at the start, but don't actually use them until later on.

This modern take on a secretive Ninja warrior clan is mostly a straight up fight fest; great action scenes and a not terribly convincing story line. (What more could you ask for in what is basically a kung-fu movie?) But, we'd like to highlight this damsel-in-distress scene near the final battle, in which the equally skilled ninja heroine is captured by the bad guys. If you can be bothered to watch the film, it's honestly not as bad as the reviews would suggest, be careful to find Ninja, and not Ninja Assassin, both of which were released in 2009. (Ninja Assassin is OK too, but it's not the film we're looking at here.)

With beautifully intricate ropework the scene oozes kinky sex appeal. Now, if only the evil villain had chosen to arm himself with a vibrating Magic Wand instead of a short Tanto knife... 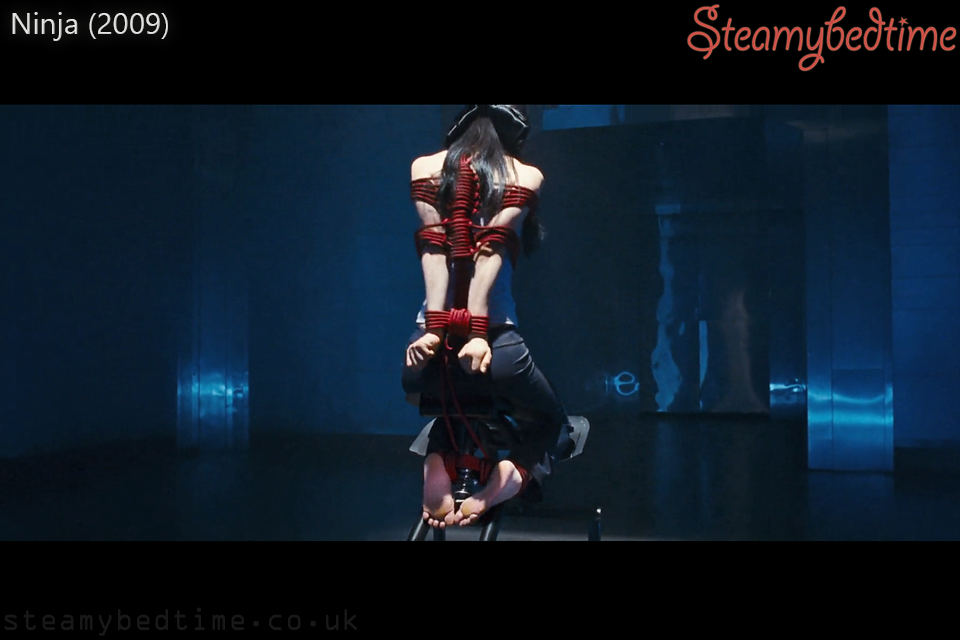 This position would be perfect on the style of kneeling-chairs that were really popular a few years back; do a search for "ergonomic kneeling chair" or "orthopaedic kneeling chair". Depending on the style of chair you have available, you might be able to use a Bondage Boutique Hogtie Kit or improvise with some Bondage Boutique Red Cotton Rope. Some bondage tape can be used to make the position even more restrictive, and she's initially wearing a silk blindfold.

The Perils of Gwendoline in the Land of the Yik Yak

Sticking firmly in B-movie territory, this film features Tawny Kitaen and is loosely based on the John Willie Sweet Gwendoline comics. It's very cheesy, but mostly in a good way, and not surprisingly is filled with nudity and elaborate bondage. In the scene below, our hero finds himself bound hand and foot, whilst believing Gwendoline to have been killed. He tries to resist the sexual demands of this women-only society, but finds himself mercilessly aroused by highly trained and scantily clad Yik Yak warrior women, in preparation for the sexy services they demand he provides to their chosen one.

Much to everyone's surprise, and to his very obvious delight, he soon finds himself face to face with a cunningly disguised Gwendoline - still very much alive. The disguise lets them deceive the voyeuristic Queen, and despite the inevitable exhaustion, they do eventually manage to escape. 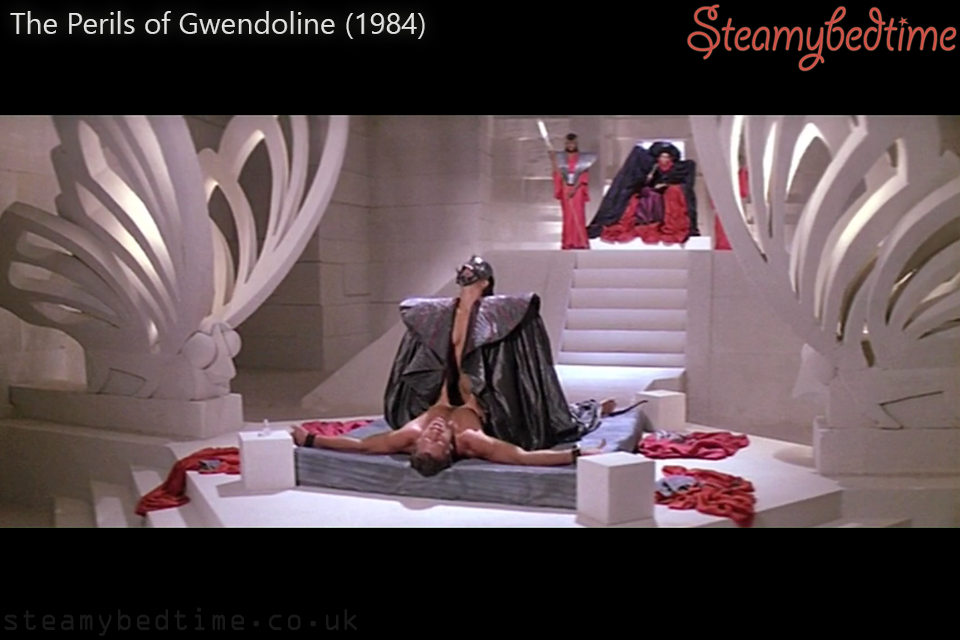 This scene is just crying out to be recreated with an Under the Bed Restraints system. If you don't have access to half a dozen sexy warrior women, you'll have to improvise, but I'm sure your hubby will still be happy with the end result!

While perhaps it's not the world's greatest work of literature or film-making, you can't argue with its immense popularity. We particularly enjoyed this spreadeagle, teasingly sexy scene from the first Fifty Shades of Grey movie. 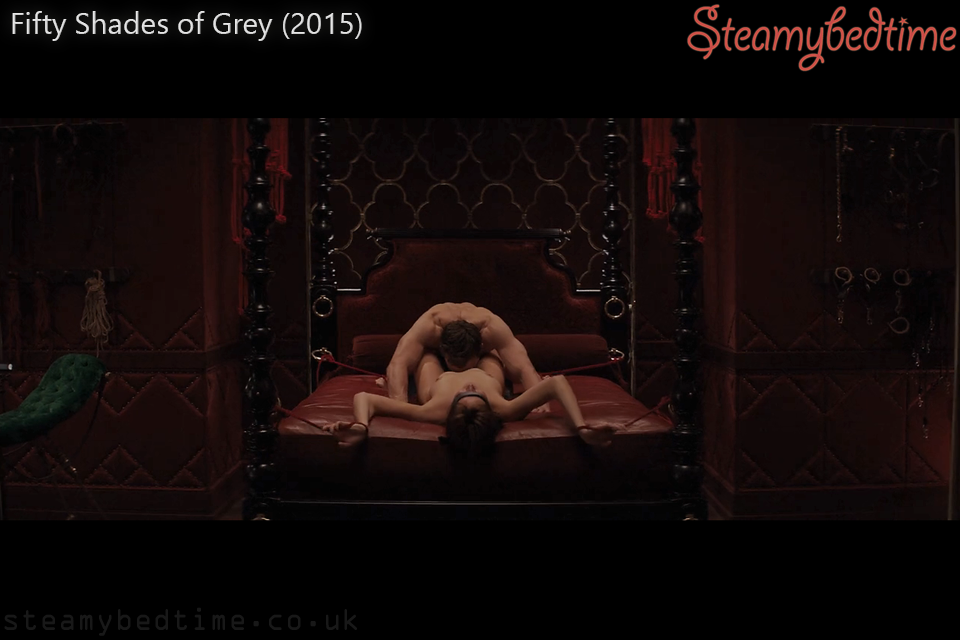 Here Christian uses four red ropes and a simple friction based tie, explained very nicely in this Cat's Paw Loop tutorial by The Dutchy. It's not a bad method, if done correctly, but if this is your thing then you should really take the time to learn some much more comfortable (and safer) knots. We favour the Carrick Bend (often seen online as The Somerville Bowline).

Either way, you'll need some rope. Check our this Bondage Boutique Red Cotton Rope, or this Fifty Shades Restrain Me Rope. And don't forget to add a blindfold for the full, naughty effect. When you're ready, join me in the playroom...

Several of the main characters get tied up in John Carpenter's Big Trouble in Little China, but these bed scenes are a couple of our favourites.

The first scene below features Kim Cattrall in the role of intrepid reporter Gracie Law, captured and rather severely tied up in her cell. We love a sexy hogtie (see our earlier article: Sofa Hogtie Improvisation) but this scene has a couple of problems. It's a simple wrist and ankle tie, but the rope is then looped around her neck. It's much safer to have your partner tie your wrists behind your back, either into a Takate Kote style box-tie or other form of simple body harness, then tie your ankles into this system. Direct and unsupported wrist to ankle tension is generally best avoided, and the involvement of the neck rope here could easily become problematic. Go carefully, and perhaps check out some Bondage Boutique Red Cotton Rope.

We're not actually sure why she was the only prisoner to get tied up. Either she was being particularly troublesome (we'd like to think so!) or it was just to make Jack Burton's subsequent rescue efforts look more exciting. If you want an even easier method to recreate this type of scene, check out this Bondage Boutique Hogtie Kit. 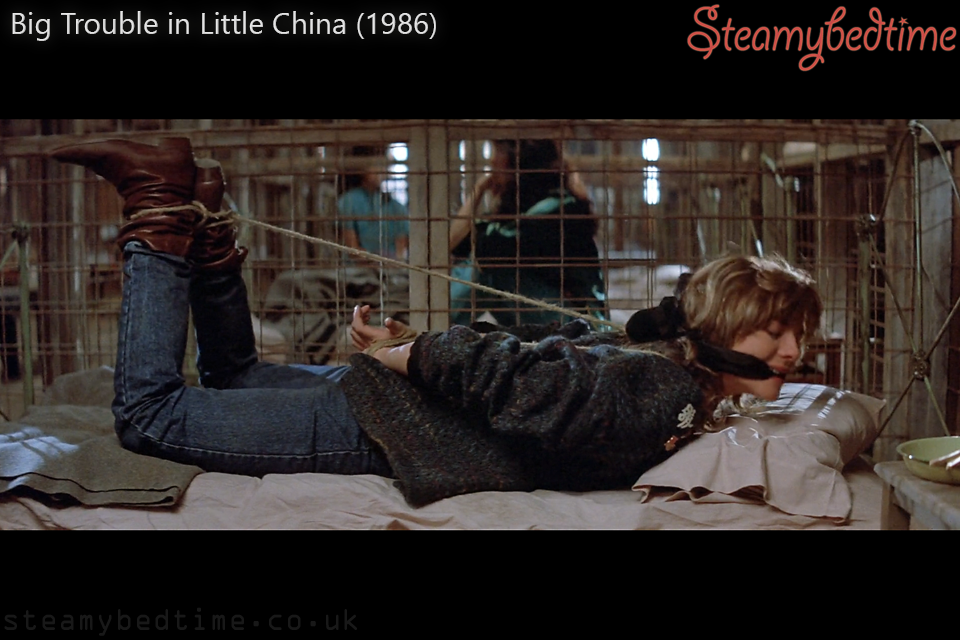 Earlier in the movie the character Miao Yin, played by Suzee Pai, is kidnapped, apparently because of her mystical green eyes. This style of tie is an absolute classic, exactly like you'd expect to find on the cover of a detective pulp magazine from the 1950's. The gags add another delicious element of kink to the scene. 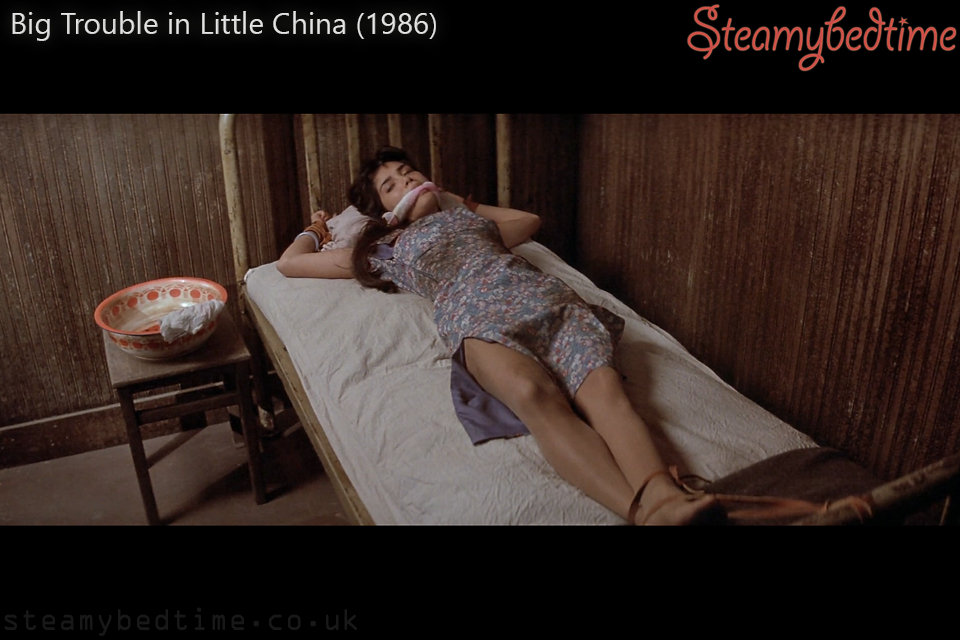 She's tied with leather straps, which look great, but may not be the most practical option, and legs apart would give more freedom. To maintain the "kidnapped and held captive" fantasy scenario, we'd recommend recreating this scene with handcuffs or bondage rope. Depending on your bed design, an Under the Bed Restraints solution might also be needed.

I hope you've enjoyed this quick roundup of a few sexy bondage scenes from popular movies, and are now feeling inspired to give a couple of them a try.

To get you started, you might need some (maybe all) of the following:

For couples enjoying kink in the bedroom, sex and blindfolds are natural bedfellows, often recommended in tips for beginners as a fun and non-threatening introduction to kinky fun and games....

We bought a copy of Chanta Rose's Bondage for Sex Volume 1 just before it went out of print, but happily it's now available again in all good book shops....