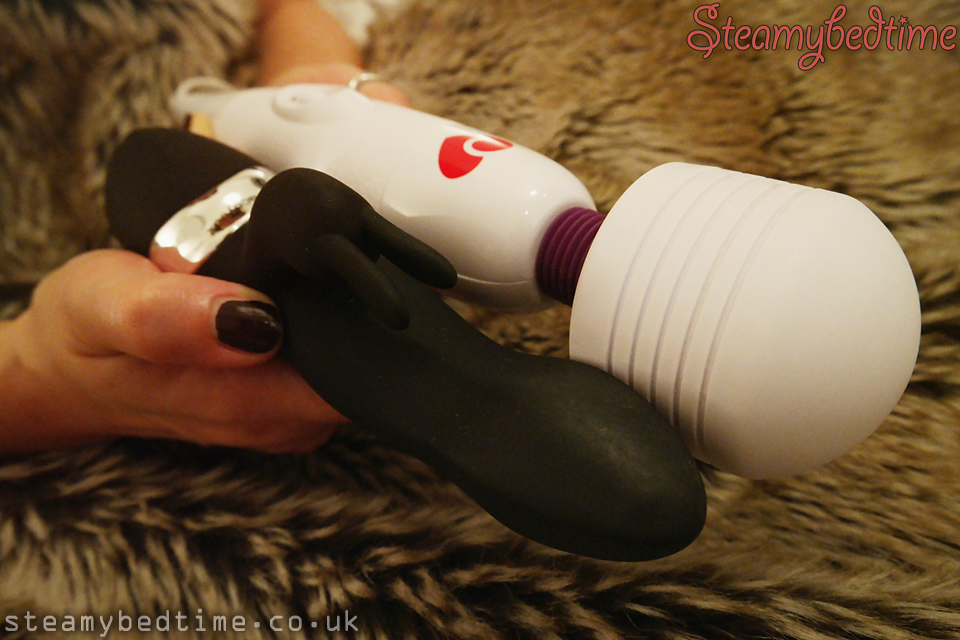 The seemingly simple proposition Rabbit or Wand really is too close to call, and ideally you should own both. In this, our first article for the Steamybedtime website, we'll recall our first impressions and some later experiences.

Our first ever sex toy purchase was the Tracey Cox Supersex USB Rechargeable Rabbit. It would perhaps be more accurate to say that it was Steve's first ever purchase, because it was a surprise Christmas gift for me back in December 2014. Initially appearing uncertain whether this present was going to come across as romantic or a little bit sleazy, he really needn't have worried. After all, who could ask for more than the gift of pleasure?

Husbands and boyfriends, you'll need to be the judge of your own partner, but this was definitely the most memorable Christmas gift of 2014, so take my advice and don't be nervous of giving a sex toy as a romantic gift!

It was our first toy, and so was also my first experience of silicone toys. From the photo on the box I'd imagined something rather rubbery, but it's not at all like that. It's strangely cool and silky to the touch, a slight slipperiness to the surface and feels gently flexible in your hands. 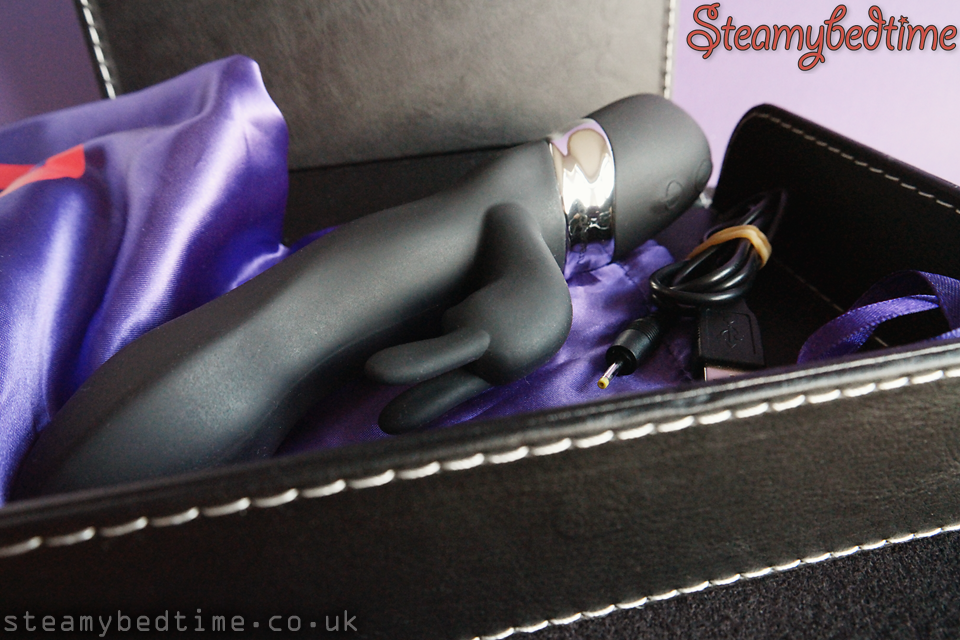 It does have some potential as a couples toy, although perhaps less so than the Magic Wand. In a reclining position you can let your partner take control and a personal favourite is when he varies the depth of insertion, pulling back so that the ears are just sufficiently out of the way to give his tongue easy access. Alternate the vibration of the rabbit ears with a few minutes of him enthusiastically going down on you and you're onto a winner! The body of the vibrator is still long enough that you'll have the added benefit of the internal vibration combined with tongue.

If I'm on my own and feeling frisky, this Rabbit is usually my first choice.

The Magic Wand was a later purchase, in the summer of 2015, this time a wedding anniversary gift. Steve is obviously a romantic at heart! His initial proclamation of "I'd better tie you to the bed so that you don't hurt yourself bouncing off the ceiling" was a pretty astute observation. My reaction, quite simply, "Wow!"

And as for the vibration, there is a single wheel on the handle, rather like a computer mouse scroll wheel, and it clicks from "off" into the lowest setting, a slow and yet deeply penetrating rumble. It's unlike any of our other vibrators, which have a lighter, buzzy vibration. Hold the head of your Magic Wand in your hand and the vibration reverberates up your arm.

You increase the power just like a dimmer switch, the vibration smoothly increasing until you reach a knee trembling intensity. The maximum setting can be a bit much, but it's even powerful enough to use through clothing, so you'll find a use for every level.

Orgasms are inevitable... nobody can resist the Magic Wand. Click the image to see us putting it to perfect use with a spreadeagle bed tie! ;-)

We've found this a great toy to use as a couple. You almost can't go wrong, orgasms are inevitable, just remember to go easy as you ramp up the power. Have your partner sit behind you and lean back against him as reaches around with the Magic Wand. If you enjoy things a little more dominant he can easily entwine his legs with yours and embrace your arms with his free hand, or it's a comfortable position to introduce additional restraint with some of your favourite bondage toys: hands behind back with Tease Furry Handcuffs, Fetish Fantasy Police Handcuffs, or get creative with Tease Bondage Tape, or indulge in some sexy tie-up with Bondage Boutique Soft Cotton Rope.

Flat on a bed is fine of course, but our experience has been your partner will get a better angle if you scoot your bum to the edge of the bed (or sofa, comfy chair, table, etc) and he can face you from below. Let him enjoy going down on you for a while and then introduce the Magic Wand when things get really heated. It's bliss! 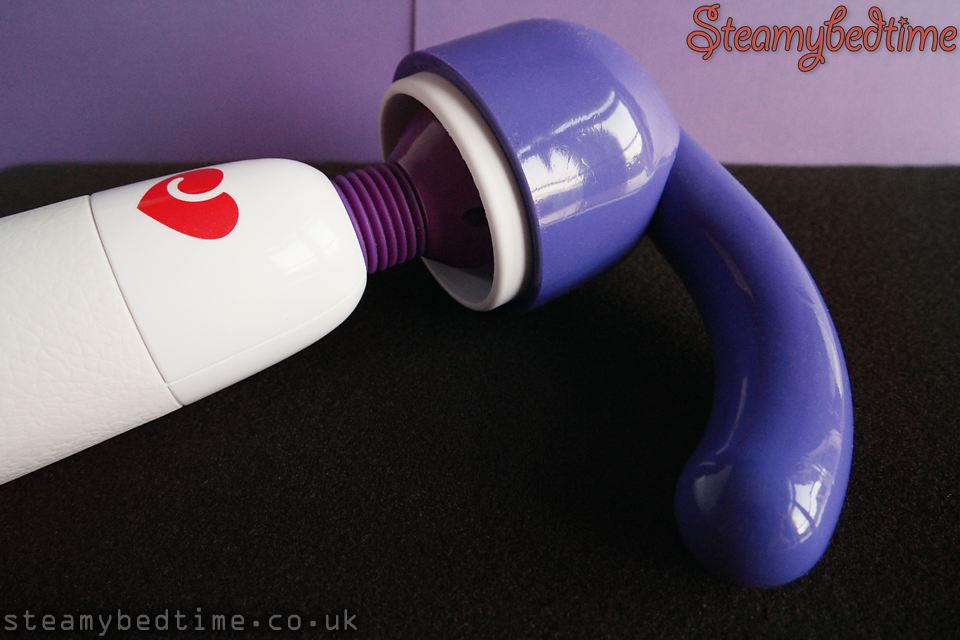 Several attachments are available, including the Lovehoney G-Spot Pleaser shown above. This is perfect if you prefer internal toys, but time and again I find where the wand really shines is when you use it as nature intended; a direct and super-intense clitoral vibrator. There are also male attachments, such as The Hummer, which we don't currently own. But same thing applies here, you can use the bare wand on your partner and to any man who enjoys vibration you'll have him helplessly climaxing before you in a matter of minutes. Great for teasing, and combining with some bedroom bondage. See this Good Vibes article, which is also linked from our Resources page. 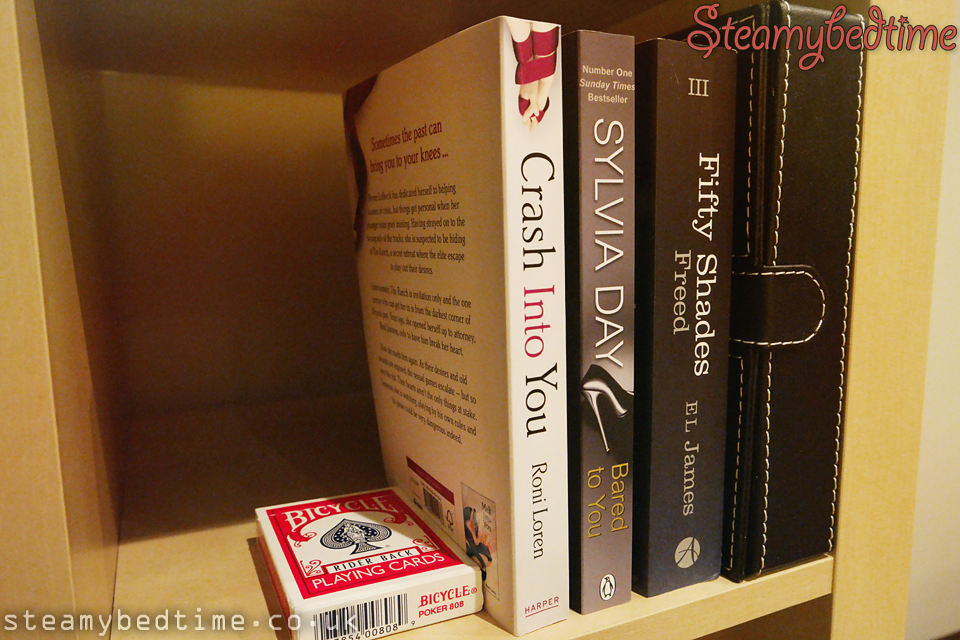 Give them both a try, and thank me once you've got your breath back! ;-)

This month's Sinful Sunday theme is "blue" although Judy certainly didn't have the blues after some restrained playtime with a magic wand...